Homeschooling in a Crisis -5 Days of Teaching Creatively

If you homeschool for any length of time, chances are that you'll hit a crisis of some sort. Life happens to all of us. We've had our fair share of crises over the years and hit a doozy 3 1/2 years ago. Our house burned. We were all home, we all got out safely and the house didn't burn down. But it was severely damaged to the point of being totaled by the insurance company. In addition we lost the majority of possessions (fire, water and smoke damage). ﻿
﻿﻿﻿
4 days after our fire, while we were living in temporary quarters, my sister died unexpectedly.  While Dr. Dh and I boarded up the house, a friend and KB went shopping for enough clothes to make it through the the trip and the funeral. Our family drove 14 hours to the funeral and spent a week with family.

Upon our return, we moved into a hotel for a month until we found a rental house, while we decided what to do with our mortgaged house. Meanwhile, we had to get the house empty. Because we live in the far north, and because of the amount of water used to get the fire out, mold was a major issue. We had to clean out the house or it would have been condemned, leaving us with few choices. Plus, we had to inventory everything for the insurance company. Yes, they pay, but you have to justify what they pay out. We did a line item inventory of most of our earthly possessions- item, date purchased, cost, years owned, depreciation.

We spent the year re-building, working hard to work alongside the contractor and God to create beauty from ashes. We moved into an unfinished house and fired out contractor, but not before he had billed us tens of thousands of dollars beyond our agreement. 2 months later my Dad unexpectedly died.

Oy vey. It was a rough time. The year after the fire I barely slept. Dr. Dh and I spent more time awake at night than asleep. And after my Dad died I couldn't wake up, didn't want to get out of bed. What was rough before became painful after. Who thinks, while their family is alive, how many hopes, dreams, future one has assigned to it? We'd had heavy, sudden loses and they hurt.

Did we continue to homeschool. Yes.
In the hotel we did a lot of what I call, "Swim school." The hotel had a pool. The kids were in it for hours. We watched a 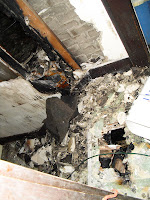 ton of movies (we had a motel suite). We cried a lot. We actually had an untoward amount of illness in our family (burning plastic, smoke inhalation, stress) and spent a lot of time doing nothing but feeling sick, going to the doctors, taking medications. We had to get the house cleaned out so we spent tens upon tens of hours at the house, cleaning, inventorying, throwing away, bagging up the possessions we had created a life from. I couldn't get warm for months and spent an unprecedented time in a hot shower. The kids took lots of baths. We did what we needed to do to take care of ourselves (when we had enough brain power to think that clearly) because, honestly, the lot of us were pretty fragile.

Our church besieged us with gift cards and we used them for meals, to get the clothes and belongings we needed. Friends from across the state and TeenPact sent suburban loads full of curriculum, toys and books. Church friends spent week-ends with us cleaning, inventorying, washing quilts, watching our younger kids, caring for us. The compassion that was poured out on our family was unnerving and I tried hard to warn people off with an admonition to "not be nice" but more often than not they were and I ended up crying. Seems like I cried the year long.

Once we hit the rental house, things became more stable. Good friends of our who own a furniture store gifted us with beds and many other friends gave us the furniture that we needed.


We continued to clean, and came to a conclusion about the house. We gutted it and re-built, and learned a ton of carpentry skills along the way. This counted as school, yes it did.
In the fall, we joined an established co-op that we'd been part of, years ago. They had both a co-op and an academic class day, providing 2 days of support- including 1 day of curriculum, complete with homework, knowledgeable teachers, accountability, and most important of all, someone else to make the decision. We'd had so many to make in so short of time, and have I mentioned before that I'm a muller, that it was a huge relief to just order the book I was told to order and drop my kids off on time at the library. The kids did the homework. They showed up. It worked.
3 1/2 years later. We still have 1 major house re-build project left. We are still dealing with major medical fall-out. We still continue to homeschool. We have learned a lot. We have grieved a lot. But, mainly, we are fine.


My best advice for homeschooling in a crisis (be it situational or chronic)
1. Have structure, if possible. Establish routines if you can.  Our hotel served a full breakfast and 3 dinners a week- we always ate together at a table during these meals, even if we didn't always arrive at the same time. (and then, of course, went to the pool).
2.Stay flexible.
3. Make use of your "helpers"- this could be a co-op, class day, the library,  CD's- our younger kids were soothed by the familiar voices of Jim Weiss on SOTW and Adnrew Pudewa on IEW's Language Acquisition Through Poetry Memorization and listened to them for hours. There are scores of great on-line resources (SchoolhouseTeacher.com), for literally pennies a day. Invest in them and use them.
4. Take the time you need to care for each other emotionally and physically. Good luck with that. It's hard to do. Be intentional.
5. Study is worship and there is healing to be found in both.
6. Find a way to nurture yourself. My on-line 52 books in a year group, the weekly lit chat,  the book lists, the words of good authors, became a life-line of simple sanity for me. (My friends Robin, Jane, Dawn, Jen, Jan, Eaglei,  and so many, many others kept me grounded in good words even when my irl life world was sickeningly dirty and painful).
7. Remember as much as possible that life is seasonal, the season will change and time heals.
8. Whatever crisis you are dealing with, God knows, sees and cares. He is there with you. He loves you.
But we have this treasure in jars of clay to show that this all-surpassing power is from God and not from us. We are hard pressed on every side, but not crushed; perplexed, but not in despair; persecuted, but not abandoned; struck down, but not destroyed. We always carry around in our body the death of Jesus, so that the life of Jesus may also be revealed in our body." 2 Cor 4:7-10

If you want more of the story, check out the Tear Down to Build Up posts, along with several under Family.
This post is part of a week of blog hopping hosted by The Schoolhouse Review Crew: 5 Days of Teaching Creatively; Day 4, Homeschooling in a Crisis.
﻿
﻿﻿

encouraging this read was. :)

What a wonderful post and it made me teary eyed. Glad we were there to give you a life line. Hugs!