Tantara: Festival of One Act Plays

A week late, but finally pictures from the play that I directed for "Tantara," Festival of One Act Plays. It was a fun day. Five plays, all very different but all performed by homeschoolers. We performed, "Can You Hear Them Crying" produced by Contemporary Drama Services. It was about the children of Theresenstadt, a ghetto created for the elite Jews that Hitler couldn't just make disappear. The play had many poems in it written by the children of Teresenstadt and was a fitting end to our poetry study this past fall. I am so proud of our cast of 8-they did a terrific job, grew as performers and learned a ton about WWII and what it meant for the children who lived and died because of it. 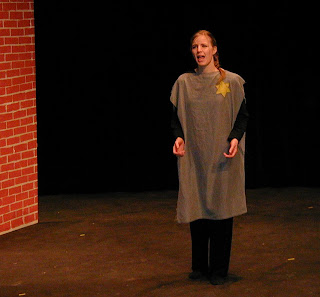 The children performing a scene together. They really nailed the timing. 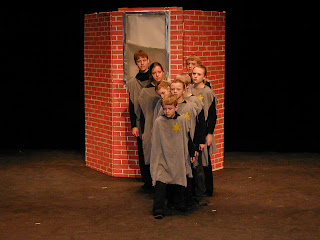 Mr. L, Miss. R and Feche-boy did a complicated scene together, with syncopated moves, poetry and choral recitation. 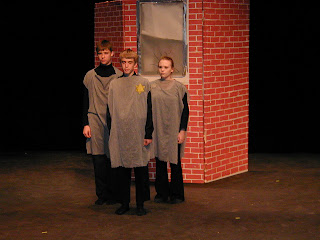 The award winners from all 5 plays. 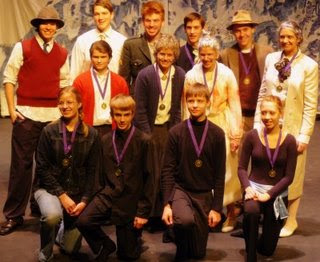 Even though we didn't win best play we did make several in the audience cry. As one of the dad's told the kids at the cast party, "Drama isn't about winning or losing, it's about touching the heart's and mind's of the audience." And in that regard, we won big time. KB, Feche-boy and Mr. L (bottom left in the above picture) also won individual "Best Actor/ess" awards- KB's 3rd year in row. I am so proud of our cast. They really grew in their understanding of performance and in their undestanding of the World Wars.
Posted by laughinglioness.lisa@gmail.com at 8:25 PM