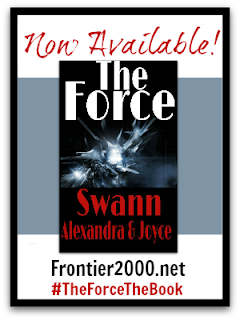 I recently had the opportunity to review The Force, sequel to The Fourth Kingdom. Both books were written by Joyce and Alexandra Swann. Old Time homeschoolers might remember Joyce Swann as one of the first advocates for accelerated education (all of her 10 children graduated with Master's Degrees by age 16), and Alexandra Swann who, at age 16, wrote No Regrets, a memoir of her life as a homeschooler. These days the Swann's are busy blogging and writing children's books and novels, with over eight books to their credit so far. You can find out more about the Swann's and their books at their web-site: Frontier 2000. But be forewarned, you'll probably add a couple of titles to your to- be-read pile. The Planner is now on mine! Want to know more? Wendy has a terrific authors' interview on her site, check it out!

The Force takes an intriguing idea: namely the ability to clone, ramps it up a notch; the ability to clone humans controlled by an evil master-mind, and puts it on the international stage. Add in one clever detective, billionaire twins, and the re-emergence of yesteryear's film stars come-alive-again and you have a compelling story.

So, what's to love about this book? The author's tackle cutting edge science. There are compelling bad guys. The good guys are willing to take risks, but struggle with facing the creepy bad guys alone in a dark alley (i.e. they are believable). The story involves international intrigue. And in a world that has gone global that's a whole lot of fun.

Why keep an eye out on this mother daughter writing team? Because their writing is getting better and better. The technically astute,  yet stiff voice from No Regrets is gone, the predictability from The Fourth Kingdom has evolved into reading that will keep you thinking long after you've put the book down and gone to bed. The authors are willing to tackle difficult subjects creatively without resorting to mere fantasy. And they are willing to allow their characters to struggle with issues of faith.  Which, as a person of faith who sometimes struggles, I appreciate.

Books abound these days, but good books, books that are well written, moral and intriguing, are as challenging to find as ever. The Swann's are definitely in the Good Book Zone! Do yourself a favor and buy The Force (along with The Fourth Kingdom) today.

You can purchase The Force directly from Frontier Media, and it is also available for $12.95 at Amazon, and for the Kindle for $4.99.

To celebrate the launch of The Force, you have the opportunity to sign up for a couple of amazing give-ways! Keeping reading.... 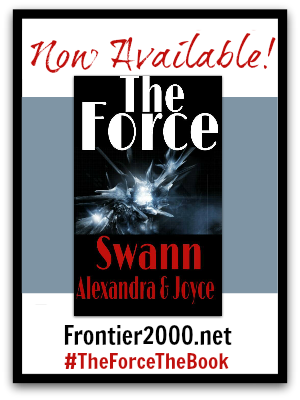 We are excited to help Frontier 2000 Media celebrate the release of The Force by Alexandra and Joyce Swann with a super cool giveaway for book lovers! Two prizes will be awarded, one containing 11 awesome books and the other with five books. Total value of this giveaway is $185! Woohoo!

We would like to thank the following authors for their generous donations to these giveaways! Be sure to stop by their websites to say thank you!

To enter the giveaway, use the Rafflecopter at the bottom of this post. Two winners will be selected and announced by noon ET on November 25, 2013. U.S. residents age 18 and older only please. Other Terms and Conditions can be found in the Rafflecopter. 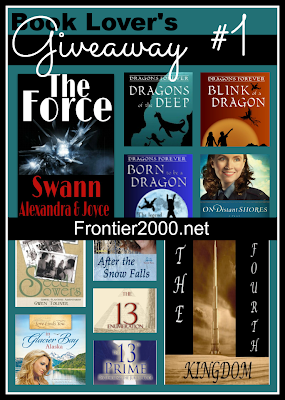 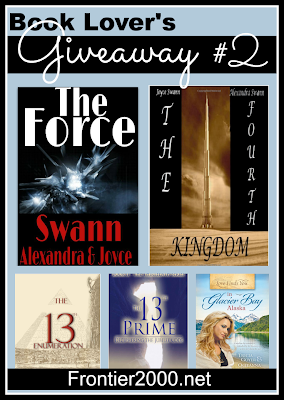 @Golden Grasses 2008-2013. All photographs, artwork and text are the property of the owner unless otherwise stated. Don't miss a thing! Subscribe to Golden Grasses and get our articles right to your inbox!
Posted by laughinglioness.lisa@gmail.com at 9:42 AM

Email ThisBlogThis!Share to TwitterShare to FacebookShare to Pinterest
Labels:kids 52 Books in a Year, curriculum review, give away

I have far too many books in my TBR pile to list them all! I'm currently reading "Dear Mr. Knightley" by Katherine Reay, and I'm loving it!

There are some excellent books in the giveaway. I've read Tricia Foyer and enjoyed her writing. I'm sure the others are just as good.

what a great group of books.

Love, love, love a chance to win books, especially a basket of books. Thanks for the review and the contest.

A island just for us by Barbara Hattemer for one is right on top.
Blessings
Diana
joeym11@frontier.com

An Untamed Heart is on my reading list.
CherylB1987@Hotmail.com

Way too many to list! I'm peobably going to pull out an old favorite like "Little Women", I've been feeling nostalgic lately!

I have so many books that I have to read or want to read. I have some by Karen Kingsbury and Beth Moore couple of my favorite authors but I love reading books.

I have so many books that I have or want to read. I have books by Karen Kingsbury and Beth Moore couple of my favorite authors but I have more authors that I like. I love reading.

I have a huge stack of books waiting to be read right now, but a couple of books at the top of that list are "The Guernsey Literary and Potato Peel Pie Society" by Mary Ann Shaffer and "Sense and Sensibility" by Jane Austen. :D

I never have enough Christian fiction on my bookshelf, these would be a great addition.

What a wonderful giveaway. I am new to your blog and look forward to receiving your e-mails and hearing about more good Christian books!

What a wonderful giveaway. I am new to your blog and look forward to receiving your e-mails and hearing about more good Christian books!

I just read two fiction books over the weekend by Cindy Woodsmall, so I'd better get onto some non-fiction. Dazzle them with Grace is one I have on the Kindle I want/need to finish!

My stack is about three feet high. It's got some Patterson, Goyer, Bohjalian, and Meyer. Too many to name!

Right now I am reading Keeping Faith by Hannah Alexander. Next is Evan Burl and the Falling

what a list! I can't wait to check some of these books out ; ). Ya;ll are making my book loving heart very happy with these suggestions!

I'm hoping to finish Glittering Promises tonight. I only have about 20 to go:)

Thanks for the giveaway! Looks like a great group of books :)

The Three R's by Ruth Beechick
Later for fun, The Ramsay Scallop--I've heard you recommend it. :)

The Three R's by Ruth Beechick. Then The Ramsay Scallop by your recommendation. :)