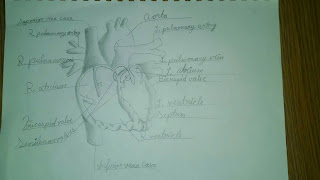 For weeks, the kids in Challenge A have been drawing the systems of the body; in detail, with labels. It's been a great exercise! 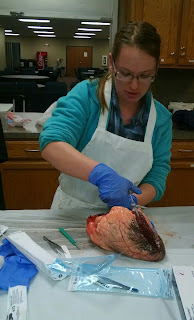 We capped off our anatomy studies with a cow heart dissection. One of our families provided us with 5 cow hearts from a local slaughter house, another family provided professional dissection tools, and the older sister of some of our Challenge 1 students (an upper level nursing student) came in to demo just how to look at, explore and understand the heart.
Thank-you, Sarah!!

5 hearts- enough for every one to get their (gloved) hands dirty. 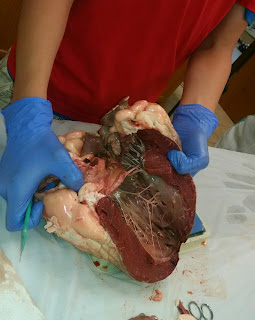 No cutting was done, until the kids had thoroughly observed and explored the heart visually and kinesthetically. 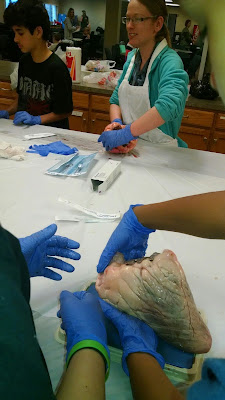 We love our host church facility! The kitchen was perfect- we taped down cheap plastic tables clothes, watched a PowerPoint on heart dissection and got to work! 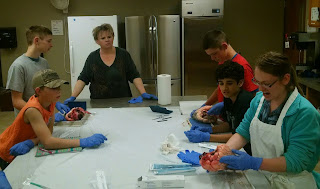 We have amazing parent support in our Challenge community!
Love our families! 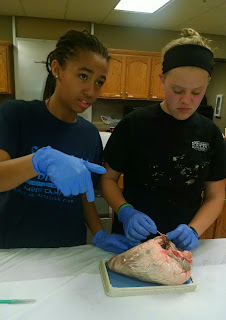 A fantastic end to a wonderful semester of hands-on-learning!

@Golden Grasses 2008-2013. All photographs, artwork and text are the property of the owner unless otherwise stated. Don't miss a thing! Subscribe to Golden Grasses and get our articles right to your inbox!
Posted by laughinglioness.lisa@gmail.com at 7:52 PM 3 comments: 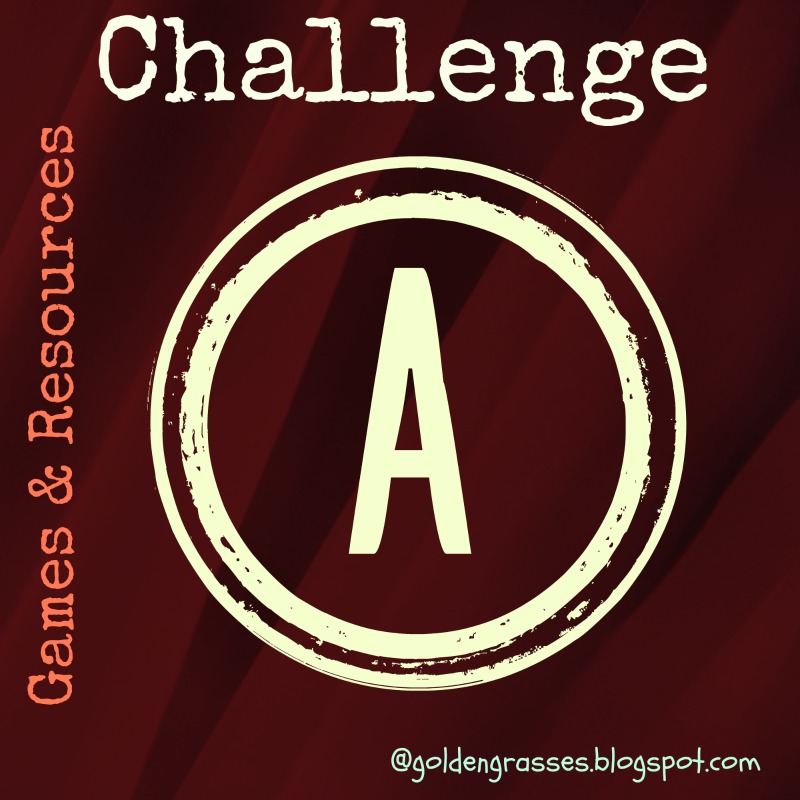 We have kept super busy this year with 2 Challenge programs, a college student coming and going a job, or two, Directing Challenge A and a few other things- too much painting of offices, for sure. But, now that we winding up Challenge, I wanted to record some of the games, resources and schedule we used before I forget them all and so that I have a handy reference for training this summer.

We started each Community Day with a short devotional and scripture reading. We sing the Doxology, say it in Latin or pray.
Then we write 5 and 5 (5 Common Topics/ 5 Cannons of Rhetoric)
Then we'd dive in to the 6 Seminars.

Latin- the kids loved Latin Scrabble. I had two sets of tiles divided between 5 groups of two each. They could add in 2 vowels and 3 consonants as needed. They could use the Latin dictionary or other Latin words as long as they were used correctly and declined/ conjugated correctly.  Often, the teams competed against each other, seeing how many sentences they could create in a limited time- they had to have their sentences checked by an adult.

To change it up: They would have to create a question using Ubi, Ibi, Cur, Quis or Quid. They would get a point for every questions created. If we had time they would then have the group next to them form an answer to their question in Latin with their tiles - this created some hilarious results!

Latin stations- several times I would put info we've studied on file cards- for instance: Latin declensions, conjugations, Grammar rules, translation from English to Latin or vice-versa - and tape them around the room. I relied heavily on the homework that we'd completed as well as Memoria Press Guides to Henle. I would intersperse the information with difficult and simple problems. The kids would go around the room in whatever order they wanted and try to solve/answer as many cards as possible in a given time.

We copied charts in class.
Every Community Day we spent 10 minutes chanting Latin charts, which I purchased from Memoria Press. I highly recommend having them professionally laminated.

We would race to see who could translate and diagram Latin sentences the fastest.

Mold, Act, Draw. I just found this game but will be playing it this coming week- the kids LOVE clay! Make a simple spinner and put Mold on it twice, Act on it twice and Draw on it twice. Student picks a vocab word from a deck and spins the spinner. They have to either mold with clay, act it out like charades or draw it out like pictionary. Set timer for 60 seconds.


Math
We did student directed Math Discussion for every seminar and then I would introduce the Saxon lessons. I created a Math Discussion sheet based on the 5 Common Topics; starting with "Definitions." The kids had to thoroughly exhaust each section before they could.
Board Slam was our best diversion - the kids continue to love it. One of our moms donated a huge bag of dice for the year and it included many different sided dice. To change it up, I'd allow the kids to pick different sided dice. We'd also set the timer for a minute and at the end of the timer the kids would have to trade their board with someone else and pick up where they'd left off.

I copied off the terms we'd learned in Lost Tools of Writing and cut them in to slips. Divide the kids into groups and they have to take the slips of paper, put them in order for a Persuasive Essay. Then, I would give the kids a topic- like the Burning Bush, or The Three Little Pigs and they would have 15 minutes to write a collaborative essay on the topic (usually only with 2 proofs for the sake of time).

Dictionary Game- the kids loved this. I would take vocab words from the reading and say/spell the words to teams- between 10-25 words, depending on how much time we had. The teams would look up and define the terms. The team with the most correctly defined terms withing a specific time limit won. Extra points for making Latin connections.

The biggest hit this year was Socratic Circles. At the beginning of the year, I would choose the topic but as the kids got more familiar with it, they would choose the topic. Great discussion!
I would also assign the kids roles to play-act: God, Moses, Charles Darwin, etc and the "audience" would ask them questions. GREAT interaction about issues related to It Couldn't Just Happen.
To review Fallacies the kids would randomly pick 3-5 fallacies/catechisms and have 10 minutes to come up with a skit that included them all. The rest of the class would try to guess what they had portrayed. This made for much hilarity.
Have the kids search for fallacies in real life- they are everywhere! Whoever brings in the most, wins points!
And, of course, we played Jeopardy.

Science
For Science, I printed off a list of things to include in their presentations as well as how to create a good presentation. The kids earned points for things like making eye-contact, introducing themselves and their topic, etc.
For body systems- once we had a few under our belt, I printed off sheets for the systems and numbered them, but not in the same order. The kids had to draw and label them in the ordered number and had to complete the lesser numbers in order to earn the higher number points. They could strategize and have multiple people drawing at the same time, but I usually gave them between 10-15 minutes to draw up to all 9 systems.

We played "Around the World" often-the kids enjoyed this.
We also played "Family Feud." I person from 2 teams would be at the front. I would give clues about a country, capital or feature and the first person to guess within 1 minute would get a point.
We often played pictionary for geography terms. The kids loved it!

My goal to end each Community Day was to go through "Collect, Connect, Compose" but I wasn't very consistent on it. Collect what they've learned that day, connect it to something they've already known and compose a poem, song, ditty, drawing, etc. about it. Great integration.

Points- I had a simple point system based on Fabas (Latin for "bean.") Kids got points for completing all homework in each strand, for winning games, for integration of subject material, etc. We had a quart sized jar that the beans went into. Once the jar was full, I had an ice-cream party for the kids at lunch. The faba jar was super important to the kids until they earned an ice cream party and then it was important, but not something they thought about all of the time. In my mind, I think it was because they were internalizing how to manage the material, making connections automatically and understanding how to work the program.

That's it. We didn't have a huge array of games to choose from, but the ones we had we used often and had a great time with. Perhaps this will spark some good games for you to do with your class or kids. If so, I'd love to hear about it!

@Golden Grasses 2008-2013. All photographs, artwork and text are the property of the owner unless otherwise stated. Don't miss a thing! Subscribe to Golden Grasses and get our articles right to your inbox!
Posted by laughinglioness.lisa@gmail.com at 1:09 PM 2 comments: