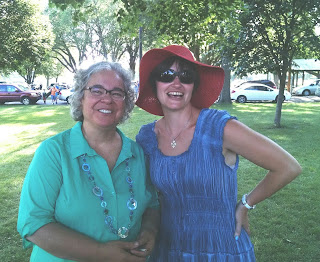 Shakespeare Camp is the brain-child of Super Mommas, Ana and Caitilin. Caitilin is our intrepid director every year, taking on the task of teaching, directing, feeding, cajoling and whipping into shape the motley crew that assembles every summer for 6 hours rehearsals and a 2 hour performance.

This was the 7th Annual Shakespeare Camp and the 5th year that at least one of our kids have been involved. This year, both Cub and Flower participated.

This year, pink- T-shirts were in order.

We had seasoned pros on stage and a few new faces.

It was Flower's first year on stage at Shakespeare Camp.
No lines, and burning up in a dress she insisted was made of carpet.
It was a bit hot the day of the performance!

Mr. T had all the moves!

A king and his men.

and Mr. I in an incredibly cool Russian hat.

Incredi-buds- on stage and off.

Scorned by the princess, regardless of incredibly cool Russian hats.

Incredi- king-Cub, spying on his Lords.

Most of the whole crew. Miss. M made a fabulous princess and her ladies in waiting were beautiful, too.

Flowers for Producer and Director. Another fantastic Shakespeare Camp, thanks to Ana and Enak! 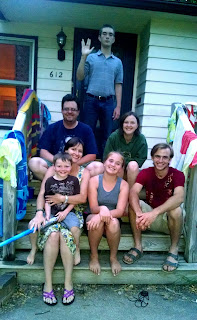 Enak and some of her crew with part of mine.
Our kids spend the week at their house, eating good food and sharing great books, good memories and a lot of laughs!

@Golden Grasses 2008-2013. All photographs, artwork and text are the property of the owner unless otherwise stated. Don't miss a thing! Subscribe to Golden Grasses and get our articles right to your inbox!
Posted by laughinglioness.lisa@gmail.com at 10:31 PM