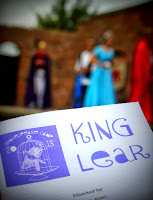 Move over Rodgers and Hammerstein: It's the Caitilin and Ana Team! For the 5th Consecutive year, Ana and Caitilin have created an amazing Shakespeare experience for local homeschoolers- this year it was King Lear, Shakespeare! Ana is the production person behind it all; getting emails out, making costumes, co-ordinating times and place, getting t-shirts and making sure everyone is fed and hydrated.  Caitilin directs. Such a short sentence for such a big job. This year was not without it's challenges, last minute drop-out performers, hot temperatures and hot-headed high-schoolers. Not to mention that King Lear is not the easiest play in the world to get behind. Everybody is betrayed, maimed or dead at the end. Fun times! Six days of 6-8 hour practices, culminating in a 2 1/2 hour performance. It drew the largest audience yet, with lots of locals pulling up lawn chairs to join in the fun.

Both of my boys on stage at the same time. The King of France, Duke of Burgandy and King Lear; Shakespeare loves the nobles! We had 6 pairs of siblings in the play. Amazing talent!

Props and costumes are all made the week of practice.


Cordelia is rescued by the good King of France (wait, is that an oxymoron?)

Doesn't Cub make an adorable King of France (that was in the prior scence), the evil Duke of Cornwall?

The wicked step sisters.
Oh, wait. They're sisters. I kept thinking Drizella and Anastasia every time they were on stage. Sword play. But, of course.

No one dies quite like Mr. S- who also died as Banquo in MacBeth.

What's a tragedy without someone losing their eyes?

Ministering to the mad King.

Yep, she's dead already. Along with most everyone else, including King Lear. 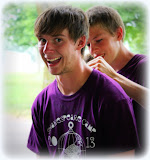 T-shirt signing is all part of the show, right? King Lear, by Shakespeare. An intense tragedy, made all the better by our talented cohort of thespians!
Want to read more about Shakespeare or our amazing Bardologists?
the Tempest Roars
Bardology
MacBeth; Homeschool Style
For more scintillating snapshots, stop by Ana's blog who has several posts of King Lear, Shakespeare and more on her blog!
And a  huge Thank-you and big hugs to Ruth, whose took all of these great pictures (except for the 2 by Ana)!

PicMonkey, LOVE.
﻿
Posted by laughinglioness.lisa@gmail.com at 11:32 AM

This looks amazing! I am so sorry we missed it. Maybe Riley can join the camp next year. She would love it!!

What a talented group! It looks like lots of fun.

And I just have to comment on your setting. Could there possibly be a more perfect stage for Shakespeare?

It's an amazing setting- perfect for Shakespeare! The kids have a blast! Carrie-I think we might get into too much trouble together if we lived closer ; ). Next year, Michelle!

We love Shakespeare and that looks just wonderful. We've rented some movies, but haven't seen any live yet.

What a cool experience! The costumes are amazing.

Looks like everyone had a great time. Love the costumes.

I am SO impressed! Wow! It all looks so professional! Wish there were opportunities like that around here. Have a great weekend. Many blessings, Lisa (from the Crew)

It looks like you had another great summer Shakespeare adventure! What a neat opportunity your kids have with that.