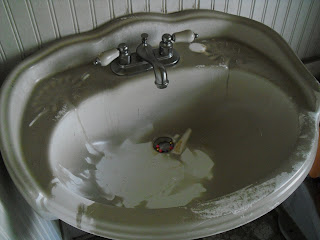 The upstairs bathroom- all of the porcelain is smoke stained. 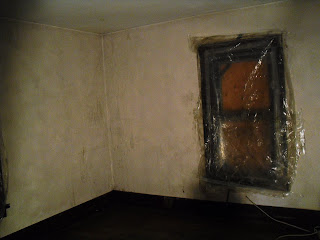 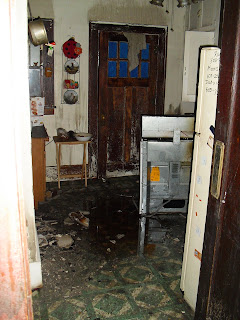 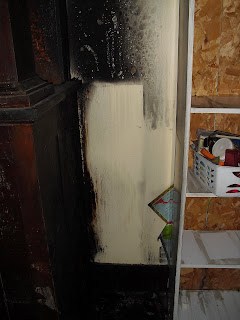 The corner where we first smelled burning plastic. The fire was already burning under the kitchen floor and had gone into the vents and was burning whatever was in front of it. 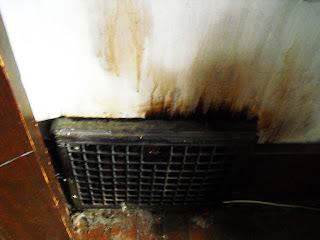 A good idea of what all of the vents are now looking like. 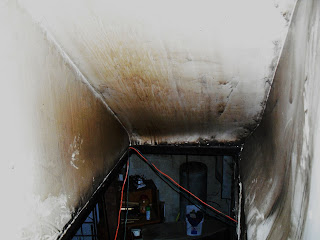 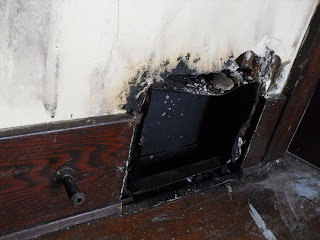 The vent in the boys bedroom, right next to the chimney (which the fire had also gotten into). 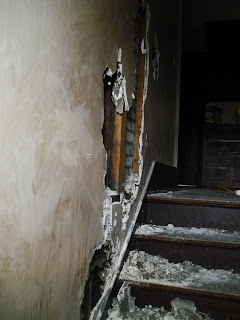 The stairwell upstairs. This wall was knocked out to get to the fire in the chimney. 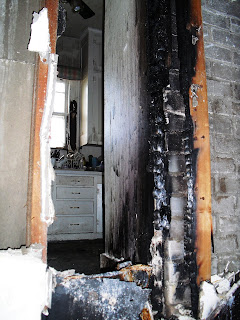 This used to be the hall going downstairs to the basement. Now a breezeway to the kitchen. 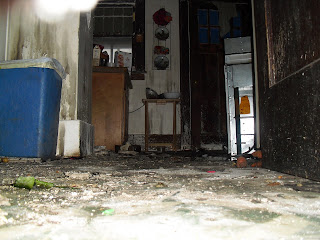 The kitchen. We can't go into it because the timbers under it are burned to a crisp. 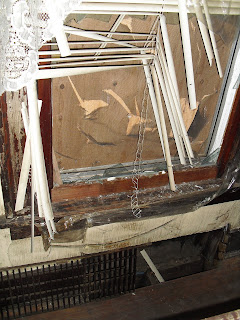 One of the dining room windows. Axes and wood window frames are not a winning combo. 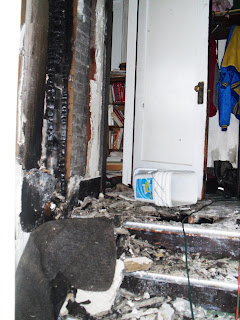 From the back door looking up the stairwell. The kitchen is on the left.
"He who dwells in the secret place of the Most High Shall abide under the shadow of the Almighty. I will say of the Lord, He is my refuge and my fortress. My God, in Him I will trust. Surely He shall deliver me from the snare of the Fowler, And from the perilous pestilence. He shall cover me with His feathers. And under His wings I shall take refuge. His truth shall be my shield and buckler. I shall not be afraid of the terror by night, Nor the arrow that flies by day, nor of the pestilence that walks in darkness, nor the destruction that lays waste at noonday.
Psalm 91: 1-6
Posted by laughinglioness.lisa@gmail.com at 7:32 AM

Oh, Lisa!! I don't get on the boards everyday, so this was the first I heard of the fire! I'm so sorry, and I will be praying for you and your family as you work on rebuilding. {{{Hugs}}}

Like Carrie, this is the first I've heard of this, Lisa! I am so so sorry for this terrible tragedy-- I can only imagine your frustration right now! Thankfully, we serve a mighty God, and with Him, all things are possible! He rebuilds the ruins and brings beauty from the ashes... be encouraged friend, that even now He is working!

Lisa: I can only imagine how very hard it is to go through your home with it like that.
You have been through so very much-you are your family have truly been in my thoughts and prayers.