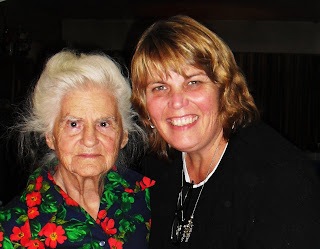 As we are sorting and bagging and throwing most of our household possessions away I am caught off guard by what hurts.

My mom was adopted, but remained motherless until she was 8 years old. When she was 8 my Grandpa married the women who became my Grandma. She's 93 now and a shadow of herself, though her eyes are still soft and brown and warm and full of life. Her nickname was "Kitty" and if you knew her you'd know that it fits.

mission to teach her.
They spent every morning of that first summer together with Gram reading mom Shakespeare. Then Mom would read to Gram. At the end of the week, as a reward, Gram would take Mom to the 5 & Dime in their Windy City neighborhood and Mom could pick out a Mother West Wind book. She had a small collection of Original Mother West Wind stories, with the original covers and the original 35 cent price on the cover.

When Mom was sick and she and Dad moved for her health they downsized everything and somehow the Mother West Wind stories made it to me. I'd loved them as a child. The stories are sweet and the pages are soft and the hardback covers are sturdy and the covers are simple and lovely. They held a place of honor, in my mind at least, in the built in bookshelf in our living room.

I'm grieving for the books. And for my mom who never got better but died instead; for my sister who is gone and with whom I've shared books and stories all of my life; for my Gram who has valued education and being a woman and faith and family and who is now frail and wispy; and for my house, which has been a home and a place of safety and refuge, which is empty and burned and full of choking smoke.

A book is such a small thing, really. But like KB said, our home was a home of ideas, like the books we've read so many times they've become part of us and the people that we've loved, imperfectly but for years,, so much that to imagine the world without them seems incomprehensible. Ideas and possibilities and hopes and dreams. And it's hard to go to the next thing yet because this season of throwing away and saying good-bye is intertwined with so much at once. The house and my family and memories and people and stories and good and hard.

I am trusting, once again, in words. Spoken by a man whose ideas and hopes have captured and captivated me for a quarter of a century. Words, stories, hope.

"I tell you the truth, unless a kernel of wheat falls to the ground and dies, it remains only a single seed. But if it dies, it produces many seeds." John 12:24.
Posted by laughinglioness.lisa@gmail.com at 11:22 PM

Thank God you do have some wonderful memories. My heart goes out to you for your loss and although my house in New Mexico didn't burn down, to me it was almost as though it burned down. I still grieve the loss of my home and all the "stuff" in it that I had to leave behind. One of the things I left behind was homeschooling. I am thankful it was by choice that I had to give it all up. I still cry each time I look up at my bookshelf at the few treasures of homeschooling that I have and am sad I have nothing left to give you. It is strange how your loss makes me grieve again for all I lost in New Mexico. Our losses are different, but still cause us to weep. Our family is choosing not to buy gifts this year for our extended family for Christmas and to only do the grand daughter. We would love to help you out instead and encourage our families to help instead of giving us the usual token gifts. Helping others is far more important than giving mindless gift cards to one another.

Thanks Dear Friend for understanding. It means so much. The love of our friends and family far and wide have lifted us up out of the grief in the past couple of weeks!!! Can you email me your number? I'll try to call soon. hugs!