"These things [the Uprising and consequent destruction of Jerusalem by the Romans] happened to the Jews in requital for James the Righteous, who was a brother of Jesus known as Christ, for though he was the most Righteous of men, the Jews put him to death." (Eusebius) 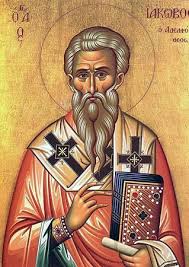 James was put to death because he would not renounce Jesus as Messiah. The Pharisees sought to appeal to old camel kneed James' sense of decency and respectability. But James had seen the light after a little post resurrection chat with his brother, once simply Jesus, now Messiah.

When getting thrown from the temple didn't quell his life, the Jews rocked James. That attempt at murder didn't take either. A fullers club did the trick and sent Yeshua's bro to the Promised Land. His death set in motion the very events that could not would not happen, though Jesus had foretold they would. They happened. The temple fell. The prophecy completed in response to the death of the earthly brother of Jesus.

Students in Nigeria faced the same fate last week. 20-somethings who refused to renounce Jesus Christ as Messiah were either shot or had their throats cut. 46 of them. Young brothers and sister in the Lord, martyred because they would not renounce the Lordship of Messiah.

I imagine they had a pretty awesome reception in the heavenly places when they arrived at their heavenly HOME.

My brethren, count it all joy when you fall into various trials,  knowing that the testing of your faith produces patience.  But let patience have its perfect work, that you may be perfect and complete, lacking nothing. James 1:2-4
Posted by laughinglioness.lisa@gmail.com at 8:59 PM

Email ThisBlogThis!Share to TwitterShare to FacebookShare to Pinterest
Labels:kids faith