Exploring & Discovering Around the World

If you've read much at GG you know that we are social science junkies. History and Science have always played a huge role in our homeschooling. This year is no different, but it has certainly taken on a different form than in past years with our involvement in Classical Conversations Challenge programs. 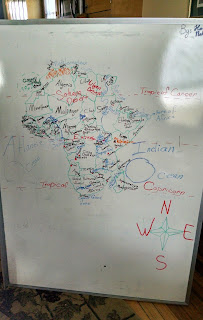 Flower, in Challenge A, has learned to draw and label the world by heart this year. She starts with a blank piece of paper and an atlas and goes from there. We have gone continent by continent, drawing, labeling, adding in features and rivers. Maps, globes, atlases have been out and about all year long. She is using our 3 x 5' whiteboard to draw on- it's bigger, she can use colored markers and she has had a blast putting in silly "keys, "features and gorgeous Compass Roses'. We are on Africa now, and have only Australia and Oceania to go. Blue book exams will ask the kids to draw and label the world, with 400 countries, capitals and features, having an hour to do so. Map- blobbing works just as well as fine cartography. We play weekly games in community day, such as around-the-world (one person starts the map, after a set amount of time, the kids rotate maps so by the time you get your map back, several people have already worked on it. This week, we are going to do a "family feud" type of game where I describe the country/ features by location, other geographic references, and the teams have to deduce what country or feature I am actually talking about.

Rhetoric this year has focused on Evolution and Fallacies. We have used the book, It Couldn't Just Happen for discussion, to learn the high lighting system and as a basis for the catechism cards. The book is simplistic in some ways, but does a great job of equipping kids with scientific facts and details. In addition to the book, the kids have memorized great stuff like, "What is good science," "What is the day-age theory," "What is a symbiotic relationship," etc. This semester, the kids are reading, The Fallacy Detective, and memorizing fallacies.

The kids are definitely learning that there is a cultural difference between those who believe in intelligent design and those who don't. During class we use Socratic Circles, play-acting, drama, jeopardy and more to discuss the issues, drill the catechisms and fallacies and integrate what we are learning with what we know already. 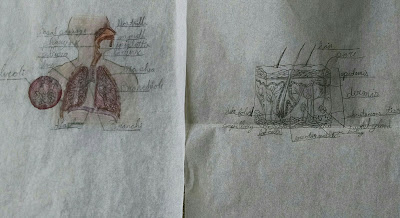 Science this year has focused on both the natural world and the human body. First semester the kids did research (using 2 sources) on a topic, such as "bats," or "cetaceans" to write a paragraph that they illustrated and gave a presentation on. I created a 20 point system with things like, "introduce self and topic," "makes eye contact," etc. where the kids could earn fabas (beans) towards an ice-cream party.
This semester, the kids are drawing and labeling parts of the body, such as bronchial system, heart, skin, etc. There is so much beauty and good learning done through copy-work and repetition! The kids bring in a cool fact, or disease, related to whatever they have drawn the week before. We are having amazing, amusing and oftentimes gross conversations about disease and wounds. Jr Highers have great stories (!) to tell!

Cub- Challenge 1, is having a much different experience this year with the Social Sciences- he is delving deeply in to Government, Economics and Debate- Econ has included a Cost of Living project, Debate has included individual events (he set a poem from Tolkien to music and sang it) and actual formal debates; last semester was on the Draft and this semester is on Immigration Reform. The kids don't know which side they'll be arguing and have had numerous study groups to prepare.
Additionally, both kids went to TeenPact's 4-day class this year, Cub as an alumni, along with the Political Communications 1-day class. Hands on learning at its best!

What about history? We are getting plenty of it in the literature selections for this year- Cub just finished both "Up from Slavery" and "Life of Frederick Douglass" that fit in with the theme of freedom and U.S. History. Flower's reading focuses on 10 books that are Newberry Award Winners. I had the kids create a timeline of the protagonists for Blue Book. Great stuff!

For fun, Dr. Dh purchased the Lord Peter Wimsey series on DVD and we are currently mesmerized by Foyle's War. Murder Mysteries? Yes, both capture the period, the costuming and, I think, often the attitudes. Great discussion fodder.

I mention NOAA and NASA Web-sites every year- they are government sites that have excellent information- not to be overlooked!

Check out the other VCF posts this week:
Yvie @ Gypsy Road - Bringing It to Life! History, Geography, & Science
Jen Altman @ Chestnut Grove Academy - Virtual Curriculum Fair 2016: Exploring Our World, How We Do Social Studies and Life/Earth Science
Laura @ Day by Day in Our World - Learning About the World Around Us
Chareen @ Every Bed of Roses - Social Studies a Science of Relations
Lisa @ GoldenGrasses - Exploring & Discovering Around the World
Annette @ A Net In Time - Science and Culture Around the World and at Home
Kym @ Homeschool Coffee Break - Exploring History and Geography
Laura @ Four Little Penguins - Going Around the World at Our Kitchen Table
Joelle @ Homeschooling for His Glory - Our Tackling of the Social Studies and Science
Kristen @ Sunrise to Sunset - Encouraging Curiosity about the World

@Golden Grasses 2008-2013. All photographs, artwork and text are the property of the owner unless otherwise stated. Don't miss a thing! Subscribe to Golden Grasses and get our articles right to your inbox!
Posted by laughinglioness.lisa@gmail.com at 2:50 PM

visiting from VCF . Kudos to your daughter learning the countries of the world. That's impressive.